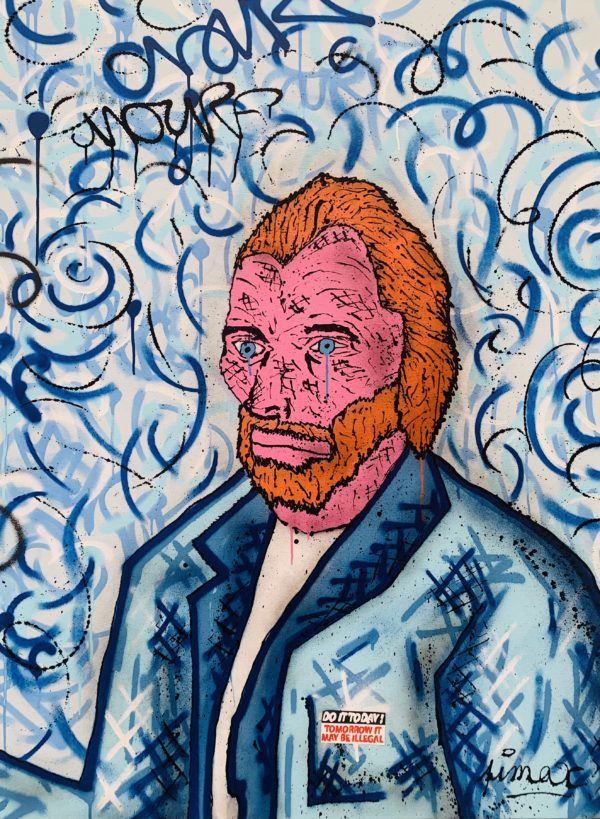 Born in 1975, Pimax got his start in the worlds of graffiti and electronic music before focusing full time on his art.  He was one of the founders of “Toulouse Hardcore Sound System,” an underground music collective born in the early 90’s in which Pimax was both a DJ and a composer.

But today he occupies a particular niche in the world of street art. Working in several media including painting, stencils and sculptures in resin, his work plays on memory, especially on themes from his childhood in the eighties, but also from the history of art as a whole with a particular affection for surrealists and contemporary artists like René Magritte or Pablo Picasso.

Perhaps the best word to describe his style is hijacking. He regularly hijacks everyday objects, like toys (Rubik’s Cube), burgers, advertising icons, and logos. Anything lodged in memory becomes a subject for his urge to hijack.  Take for example his series of Campbell sculptures in red resin, referring to Andy Warhol, as well as his series on Darth Vader from Star Wars, or the hedonistic cherub or the bird caught in an oil spill… From these works emerges a critique of consumer society which highlights the chaos it brings to modern society. Yet his work also contributes to that chaos.  In fact it feeds his work.  Within his studio, he is immersed in a colorful pop universe, surrounded by his own creations.  Still, he never forgets the world in which he lives.  These icons of consumption serve as inspiration and models for his sculpture.

Pimax creations also invite a reflection on time. The moment is frozen in its resins or in its paintings. His works always refer to the strength of our memories and representations of our imagination bringing together a public across several generations.

Each piece is unique and distinguished from those produced in the same mold.  From the prototype to the mold, casting and on to assembly and polishing, everything is done in his workshop in France.

In Paris, where Pimax lives, he decorates the streets with his stencils and in his ephemeral paintings that recycle the classics.

Pimax work conveys powerful, intriguing and provocative messages that impose a reflection on the world around us. As an urban artist, a sculptor, an activist and a DJ he escapes norms.  This difference is at the center of his artistic approach.